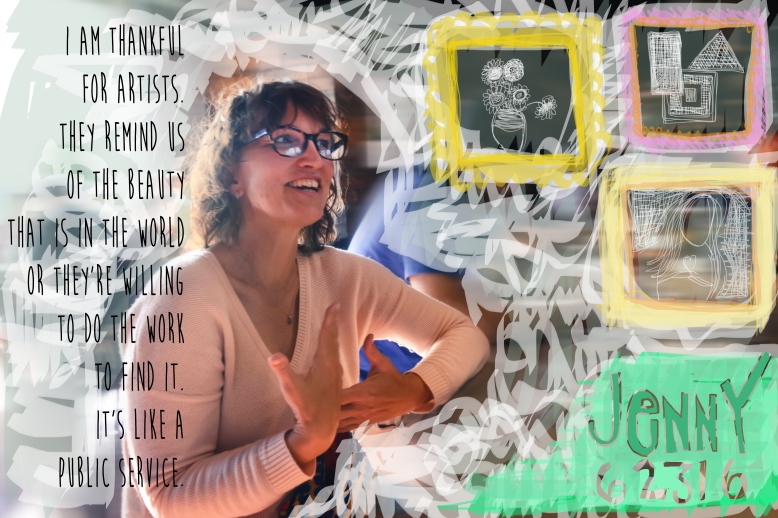 My favorite thing about art is that I feel like it makes us all more human. I mean it from a production side and I mean it from an absorbing side. I think the production side is almost obvious. It truly helps people to work things out. I think a lot of artists don’t realize the gift that working their own stuff out gives to everybody else. I think that if Art is made from that true place, it releases it also in the viewer. That is magical and powerful.

I feel like artists are on the front line of a lot of things for society. They are brave enough to start translating and evaluating what these things mean that stop us emotionally and as a society. The good ones are able to tap into this thing that is the same in all of us. As our culture expands, we tend to lose that, which is why Art is that much more important for us to be able to find those commonalities.

I’ve always appreciated anything anyone takes time over. I’m fascinated that people will spend the time and energy to create something that is worth our attention.

I truly believe that some people have it. And some people are true appreciators of it. We need both camps. Making art has never been something I miss. I have had some of my worse experiences trying to make art because I was forced to in school or because I thought I should.

Maybe it is worse, because I appreciate great art so much, to look at my own is like “Eh.” I really am so far on the appreciation side. I am really in awe of people who can do it. I’m fine with that. I think it is important to have an audience and to help get Art out there.

There are other pieces that move me— like political pieces. There is the one by Faith Ringgold. One of her flag paintings called Flag for the Moon which was created around the  first time we landed on the moon. When you first look at it it looks like an American flag. But when you look closer, it says “Die” in the stars and along the stripes it says “Nigger”. It was this whole commentary on how can we spend enough money to put a man on the moon when we are ignoring an entire part of out population that needs our help.

She took this whole concept— huge, enormous, political things— so simply and perfectly subversively. At first you see it and you think “Oh, theres an american flag. I love the american flag” and then you read it and you know right away what she means, what she is saying. That’s so great– when things like that have a sneaking power.

We know it when we see it. You just know it. The more tremendously personal an artist can get, the more response there will be, because it is so amazingly honest.

A lot of people can feel intimidated around art and that is mind boggling to me. It should be this very free and open place. If I had a magic wand, I would erase that notion of how your supposed to feel about a certain piece. You will find your own algorithm and you will find what you love and that’s ok. I’m continually amazed by the almost fear of it. I would also like to take all the money out of it. I find that heartbreaking, because I find Art so life enhancing.

I was thinking about this the other day, because I went into someone’s home and they had a lot of art in the walls. And the house was so alive. We are so much more alive when we let that happen. And the art wasn’t maybe something I would like, but that didn’t matter. It just felt so good. It feels good to surround yourself with it.

I hate it in museums when they have tours going and they announce how much something sold for. And then everyone likes that painting the best. This is not what this artist intended and it really has nothing to do with the art.

Unless it’s Jeff Koons. But that is what I like about him. His work drives me crazy, but its great because it is just mocking us mercilessly. I think if you took the money out of his work, I would love it. But I get all caught up on people trying to buy Jeff Koons and what they’ll spend and they’re buying on speculation. And they’re thinking it’s something else. I just try to avoid that.

Patrons are important. Without patrons, what would we know about anything? During the Renaissance there were amazing patrons. But, they were a pain in the butt and they were mean and they were evil to the artists. But they were putting their money out there and they were encouraging.

That’s the great thing about an artist though, in my mind, is that maybe they have to walk that walk, but they’re going to find their way. They’re still going to be themselves. And I love that. It’s so rare. And it’s so wonderful.

I am thankful for artists. They remind us of the beauty that is in the world or they’re willing to do the work to find it.  It’s like a public service.

There was an error retrieving images from Instagram. An attempt will be remade in a few minutes.

I am in The Workhouse!
50 Scott Street • Bend, Oregon
You can stop in to buy Teafly Products:
Tues-Sun 9am – 5pm
Mondays 9am – 2pm